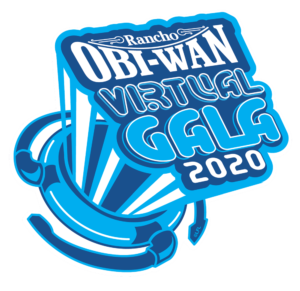 Your donations help us protect the collection, maintain the facility,
and develop new programs of inspiration and education.
Funds raised are used for insurance, utilities, taxes, fees, security, professional services,
maintenance on the buildings, and protection and preservation of the collection.
None are EVER used to acquire OR ship collectibles.
URGENT needs this year due to threat of fire in California:
32% increased insurance, installation of rooftop sprinklers, and maintaining defensible space!

In a non-pandemic year, we would invite approximately 150 of you to our home for a festive party with food, drinks, auctions, prizes, and live entertainment. In 2020, we are excited to present an online Gala for the entire galaxy that will provide as much fun, interactive entertainment, and interesting content as we could offer in our virtual space.

Rancho Obi-Wan President and CEO Steve Sansweet has candid conversations with influential folks in the Star Wars community and there are guided tours of usually unseen parts of the museum. Check out the costume contest and scavenger hunt winners and take a drawing class with Spencer Brinkerhoff.

Tickets to view Rancho Obi-Wan’s Virtual Fundraising Gala 2020 Archived Stream are $30 and are available through 11/30/2020.

Get to know ROW below:

All times are Pacific Time. Be sure to adjust according to your time zone.

The wine tasting is over. Thank you for participating! Please visit Skywalker Vineyards to purchase wine.

And the winners are:

And the winners are:

How to Draw Star Wars with Spencer Brinkerhoff 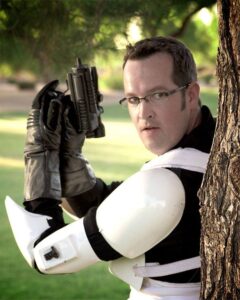 “I started drawing and making art at an early age and never stopped. After graduating with a Fine Arts Degree from Arizona State University, I wasn’t sure how to find “real” work so I kicked around a bunch of different jobs. I’ve sculpted some of the horses for the PF Chang’s restaurants, animated an educational game for the World Health Organization, created and starred in a video that helped me Burt Reynolds’ Trans Am. But one of my greatest accomplishments is to be an officially licensed Star Wars artist. Oh! And a husband and Father! Whew! I dodged a bullet there. I am a full-time creative, a part-time Star Wars artist, and hold down a day job as a curriculum designer and trainer. In addition to those accomplishments, I’ve also created an in-camera special effect keychain called LightStickFX (it magically adds laser beams to your photos), and a drawing system called DrawingIsSimple (DIS, simply trace around the patented coin, mark the guides and you’ve already started drawing!).”

The Late Night Star Wars Trivia After Party is over. Thank you for participating!

The Gala Wheel is no longer available. Thank you for participating!

The Auction is over. Thank you for participating!

The Gala exclusive store is closed. Thank you for participating!

Purchase a Gala ticket as a gift for a friend