Rancho Obi-Wan has been officially recognized by GUINNESS WORLD RECORDS® as housing the “Largest Collection of Star Wars Memorabilia” in the galaxy! Steve Sansweet has amassed more than 300,000 unique Star Wars items since 1977. The just-released GUINNESS WORLD RECORDS® 2014 Edition features an amazing two-page photograph of part of the collection.

Steve started his Star Wars collection before the movie even premiered, plucking his first piece, a 20th Century Fox/Lucasfilm promotional booklet, from the wastebasket of a colleague at The Wall Street Journal. As a born collector who loves science fiction, he naturally picked up anything related to Star Wars, and over the course of time the collection grew to enormous proportions.

In 1998 Steve purchased a former chicken ranch on the outskirts of Petaluma, California with a large-enough space to store the collection, and named his new home Rancho Obi-Wan. Today Rancho Obi-Wan is a 9,000 square-foot non-profit museum. Star Wars fans can experience the magic of Rancho Obi-Wan first-hand by scheduling a tour, personally guided by Steve.

“I’m delighted with the recognition from GUINNESS WORLD RECORDS, which for years has been the authority in these matters,” Steve said. “We were really excited to work with the Guinness folks. Preparing the photo shoot set a record in my book for one of the most fun-filled days ever at the museum,” Steve added. “We were especially happy to have Craig Glenday, editor-in-chief of GUINNESS WORLD RECORDS in the U.K. and a huge Star Wars fan, with us to personally oversee the shoot. We kept adding so many great items that we don’t even know how many individual ones can be counted in the photo!” 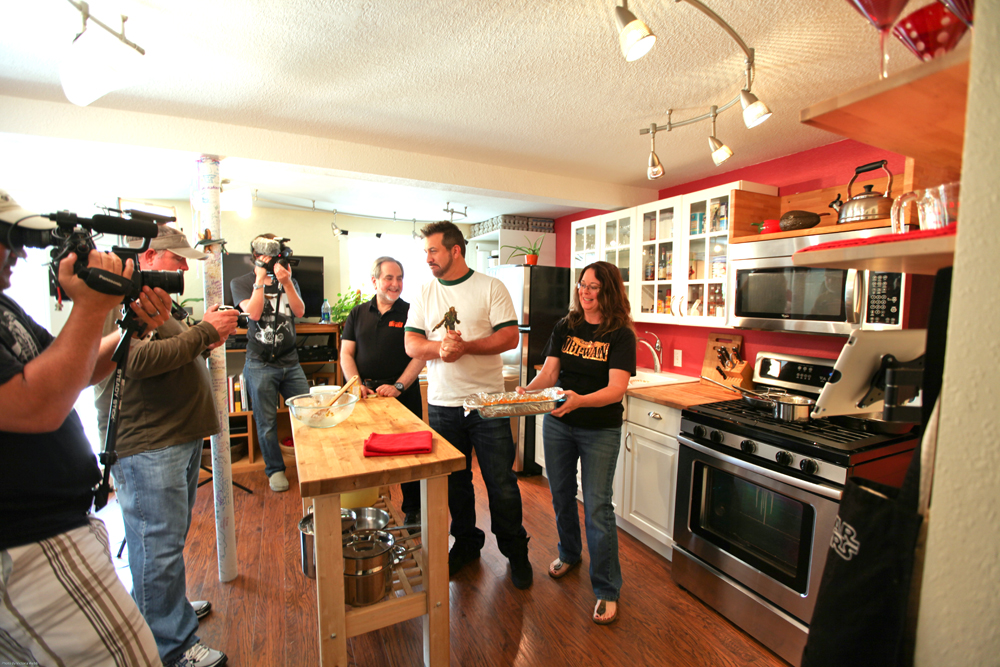 Did you catch Rancho Obi-Wan on Disney XD’s Fandom version of My Family Recipe Rocks with Joey Fatone? Joey and crew were here in May to film the episode. Here is a video snippet from Entertainment Weekly and a short article from Parade. And here are the links to the recipes that were featured so you can run home and make some for yourself. Enjoy!

* All our behind-the-scenes photos were taken by Rancho volunteer Victoria Webb who was recently voted best photographer in Petaluma AND best wedding photographer in Sonoma County. We are thankful for her services!

There’s a new place to visit on your way to or from Rancho Obi-Wan. It’s Imagination Park, a new pocket park in the center of San Anselmo, California, where George Lucas lives. And featured is a soothing fountain and waterfall with life-size bronze statues of Yoda and Indiana Jones by famed sculptor Lawrence Noble.

The property and the statues were a gift of George Lucas, who has lived in San Anselmo most of his adult life. He also paid for the demolition of the old commercial buildings on the site, which is next door to San Anselmo’s Town Hall and police department.

San Anselmo is half-way between San Francisco and Petaluma, the home of Rancho Obi-Wan. While the life-size Indy statue is the only one of its kind, the Yoda bronze has a longer and more complex history. Yoda was commissioned by Rancho Obi-Wan CEO Steve Sansweet and four friends. Noble said he was also going to cast one as a gift for Lucas, who loved the piece. A limited number (20) were licensed for sale.

Lucas placed the first Yoda in front of then-newly-opened Big Rock Ranch when Lucasfilm corporate headquarters moved there from Skywalker Ranch. In 2005, he put another atop a fountain at Lucasfilm’s San Francisco headquarters at the Letterman Digital Arts Center. The other Yoda bronzes are in private collections—with one proudly displayed along with some of Noble’s other sculptures and art at Rancho Obi-Wan.

The address of Imagination Park is 535 San Anselmo Avenue. There is still an opportunity to help fund the park’s landscaping and upkeep and get your name recognized in the park.

Rebelscum.com is giving away Rancho Obi-Wan memberships through their Random Giveaway program. The first winner is Charlie West. Charlie is already a friend of Rancho Obi-Wan and last month sent us an amazing letter that let us know our mission of Inspiration is indeed being fulfilled. Thank you, Charlie, for your words, and more importantly, your deeds. Take a look:

To say things have been busy at Rancho Obi-Wan would be a HUGE understatement. Just three days after we packed and sent off enough cool items for the Rancho Obi-Wan Experience at Star Wars Celebration Europe II (Essen, Germany, July 26-28), restocked the shelves with previously unseen treasures for several months of tours, and cleaned the place, we spent the day taping a TV show with the awesome Joey Fatone, singer/dancer/actor extraordinaire and fellow Star Wars geek.

It began innocently enough just a month ago with a brief message from a mutual friend: “Joey Fatone wants to contact you for a project he’s working on….” Um, that’s intriguing. I had met Joey and his family at Celebration V in Orlando in 2010, and we’ve been trying to get him to visit Rancho Obi-Wan since. But the man works nonstop. Currently, among other gigs, he hosts “My Family Recipe Rocks” on Disney’s Live Well Network. Joey asked me to get in touch with his producer, Jeff Aiello. And then we got the full story.

Disney’s cable television honchos wanted a crossover version of “My Family Recipe Rocks” to air on the young-male skewing Disney XD channel, and sent over a list of Disney’s top brands to choose from. When Joey saw that Star Wars was on the list he told Jeff, “Call Sansweet!” And with wonderful input from Rancho general manager and ace cook Anne Neumann, we devised what will go down in history as the world’s first Star Wars cooking/museum tour show!

We worked for seven hours straight, powered by Joey and Jeff’s enthusiasm and fueled by Anne’s tasty treats based on some of her own recipes and some from the various Star Wars cookbooks—but all saga-themed. We had the best time! There’s a lot more to share about what happened and when the show will air, and we’ll be sharing that information in the coming weeks. We can assure you now, however, that Star Wars is really…yummy!