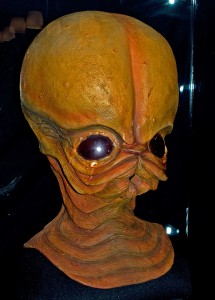 The Mos Eisley Cantina was one of George Lucas’ most ground-breaking visions in the 1977 release of Star Wars. This seedy bar of outlaws was a nod to the saloon scenes from Westerns, but populated with a wide range of alien species to set it in a galaxy far, far away. The cantina scenes were originally shot at Elstree Studios outside of London, but Lucas was dissatisfied with the original shoot and the limited range of characters, so the cantina was reshot in Los Angeles in early 1977; footage from both shoots was seamlessly combined in the version we see onscreen.

Many of the masks used in the cantina came from other productions, and creature makers Stuart Freeborn’s and Rick Baker’s teams added many aliens to the mix. Because of the extreme time pressure to complete the cantina scenes, many of the alien masks were one-of-a-kind and incredibly detailed, requiring many days of work to build from scratch, yet dropping the standard production practice of creating backup masks. 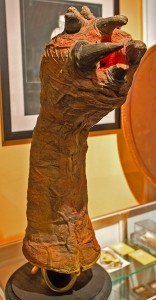 Surprisingly, quite of few of the original cantina masks still exist today and have made it into the hands of collectors. Most are in great condition despite being made of materials (like foam and latex) that decompose with age. But the one-of-a-kind nature of the cantina shoot makes collecting original cantina pieces exceptionally difficult.

Famed animator Phil Tippett was hired to help create the Star Wars cantina creatures on a rushed schedule. Several years ago, Tippett sold a few of his cantina pieces at a Profiles in History auction. My favorite piece from the Tippett collection is the Dice Ibegon (or Snake Head) puppet. The Snake Head character was actually not a mask but a large hand puppet. As a puppet, it could achieve the desired scale relative to other characters and have goo oozing from its mouth through tubes. 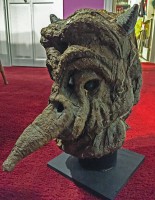 One of other cantina pieces kept by Tippett was the M’iiyoom Onith mask (also known as Nightlily or Yam Nose). Her character is seated next to Feltipern Trevagg (Gotal) at the same table. The Yam Nose mask has many details such as pimples and round disks on the surface, green eyes, horns, hair along the surface of the mask, and a long nose used to sip drinks. Although I was disappointed to miss out on the Dice Ibegon and M’iiyoom Onith screen-used pieces at auction, I was able to purchase them from a fellow collector years later. That serves as a great reminder of the important role that friends play in helping out fellow collectors. 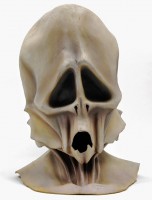 Seated on the other side of the table next to Feltipern Trevagg is Elis Helrot (aka Skull Head). Helrot was another Rick Baker mask for the Los Angeles reshoot based on a Ralph McQuarrie’s design for the species. Star Wars fans touring Rancho Obi-Wan can see Steve’s Elis Helrot mask on display in one of the cases near the front of the museum.

Rancho Obi-Wan also has another production-made cantina mask on display, one of the Duros aliens. A pair of Duros characters are seen chatting away at the cantina at another table. The Duros species appears in other Star Wars stories such as the bounty hunter Cad Bane from the animated Star Wars: The Clone Wars. 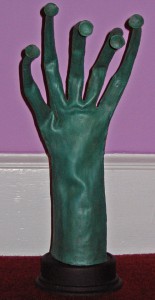 Other cantina pieces to surface include alien hands such as this Rodian hand which was made of a simple rubber glove with elongated fingers and suction cups at the end. This simple design served its purpose in close-up shots of Greedo reaching for his blaster. For the Star Wars prequels, Rodian characters had much more elaborate detail in their prop hands. Another cantina character with a prominent hand is Kabe, the short rat-like creature seen reaching for a drink at the bar. The piece shown here is Kabe’s left hand with fingernails and lots of hair. These examples are just small selection of the masks and props from the Star Wars cantina that are now sitting in private collections, preserved by collectors who showcase these timeless pieces.