I’ve flown from one side of this galaxy to the other and seen a lot of strange Star Wars stuff, but there’s nothing that could prepare me for finding a Star Wars barf bag in the seat compartment in front of me!

The first Star Wars air sickness bag was produced by Disney for the Star Tours ride at Disneyland. Flight simulator rides such as Star Tours can trigger motion sickness in guests, so Disney planned for that eventuality with Star Tours branded bags—for possible practical use, but also as a gag gift for test riders including families of the Walt Disney Imagineers who worked on the ride.

The bags have a 1986 copyright date; the first Star Tours ride opened to the public at the Disneyland Resort in Anaheim in January 1987. By then, just about all of the really stomach-churning moves of the Star Tours flight simulators had been removed from the programming. So the bags were seen as more of a clever publicity gimmick than a necessity. Enough had been produced that many—unused ones—ended up in collector’s hands. 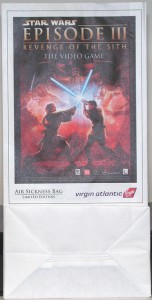 In 2005, Virgin Atlantic Airways Ltd., working with LucasArts, promoted the release of the video game for Episode IIII Revenge of the Sith on their trans-Atlantic flights with a series of four different Star Wars barf bags, all themed around Sith vs. Jedi. One bag featured an instruction guide for using a lightsaber, another had a diagram illustrating lightsaber components, and yet another offered insight into Jedi combat. My favorite was the Jedi and Sith seating chart with the Light Side and Dark Side of the cabin to keep both sides separate and avoid any unpleasant confrontations.

And there is another—a very limited bag indeed. Rancho Obi-Wan, being a special place, shares the highly-coveted distinction of having its own barf bag alongside those of Star Tours and Virgin Atlantic. To commemorate the November 2013 road trip to Rancho Obi-Wan by members of SARLACC, the Seattle-based Star Wars collecting club, member Curt Hanks designed “Admiral Ackbar’s Air Sickness Bag” for this special occasion. With the SARLACC and ROW logos and highlights such as green Mon Calamari spew, this uniquely designed collectible adds the slogan: “Rancho Obi-Wan—A collection so big it might make you sick!”