Star Wars fans begin their journey into collecting along many different paths, and action figures are frequently the “gateway collectible” of choice due to their widespread popularity.

A lot has been written on the subject of Star Wars action figures, and the fascination continues for novice through veteran. My first objective as a beginner was to complete my set of Kenner loose action figures. Over the years as I learned a lot and expanded my network, that interest grew into other areas related to action figures: boxed vehicles, carded figures, toy store displays, and eventually prototypes of the Kenner line. Along the way, I learned more about Kenner’s production process and helped unearth examples of unreleased toy concepts that never went to market. The networking that led to the discovery of previously unknown items eventually fueled my interest in collecting production memorabilia, props, and costumes from the Star Wars films. This same transition was repeated by friends who progressed from Kenner Star Wars figures to Star Wars movie props, while never losing the passion and interest for the toys that brought us all into the hobby. 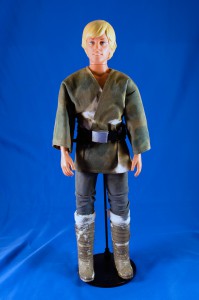 The Kenner large size action figures were amazing in quality and detail, even by today’s standards. But at the time, the competition from the Star Wars small-scale action figures cannibalized sales, and Kenner shut the line down shortly after the release of The Empire Strikes Back. So how could there be a Luke Skywalker large-scale figure in Endor poncho when the line was shut down prior to Return of the Jedi? In an unusual confluence of the action figure and movie production worlds, this Luke Skywalker large-scale Endor figure was created by the Industrial Light and Magic Model Shop for the speeder biker animatics in Return of the Jedi. Animatics are rough, early sequences of a scene designed to connect the shots and establish the timing of the special effects. Today, animatics are done digitally with computer generated models, but back in the day of Return of the Jedi, animatics were shot by hand in film or video using whatever pieces that could be assembled. 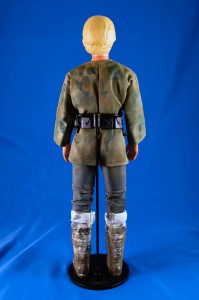 For the speeder bike chase animatic, ILM used Star Wars action figures in different scales for various close-ups. Large size Princess Leia, Luke Skywalker and Boba Fett action figures (the latter standing in for Biker Scouts) carried out the action in many of the animatic shots. The Luke figure displayed here was the one used in those animatics. ILM staff took a Kenner 12-inch Luke in Tatooine outfit sold in stores and painted the tunic, pants, and boots while adding painted socks. In many of the animatic shots, the Leia action figure is actually wearing this camouflaged Luke tunic reversed to appear as Leia’s poncho. The final special effects sequence in the film is faithful to the early action figure animatic. The other pieces from the speeder bike animatic are not known to exist today, and this 12-inch Luke Endor is a unique remnant from that filming.

Star Wars action figures revolutionized the toy industry and movie-product licensing, but also played a small part in planning and creating the third Star Wars film. This piece also symbolizes something special to me: it connects the universe of toys that brought me into Star Wars collecting with the universe of items used to make the movies—the center of my collecting focus today.

See a comparison of the animatic with the final scene here: