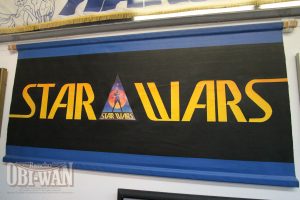 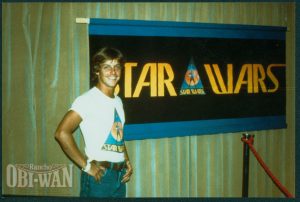 Today we mourn the passing of Charles Lippincott, whose name is mentioned on every tour of Rancho Obi-Wan because of this banner, which is on display here, and was painted by Joe Johnston and illustrated by Ralph McQuarrie. Charley took this banner with him to San Diego Comic-Con in 1976 to promote a little-known film called Star Wars—and thus gave birth to the modern phenomenon of fan relations for the movie industry.

For Star Wars Corp., Charley was VP of Advertising, Publicity, Promotion & Merchandising and was largely responsible for the Marvel Star Wars comic books and, with 20th Century Fox, the Kenner Products contract that revolutionized toys and helped make George Lucas an independent filmmaker. Charley was generous with his time and gave a long interview to Rancho’s Steve Sansweet for the groundbreaking 1992 book, Star Wars: From Concept to Screen to Collectible. The Force will be with him…always!